EVERY 30 SECONDS SOMEONE BECOMES A VICTIM OF 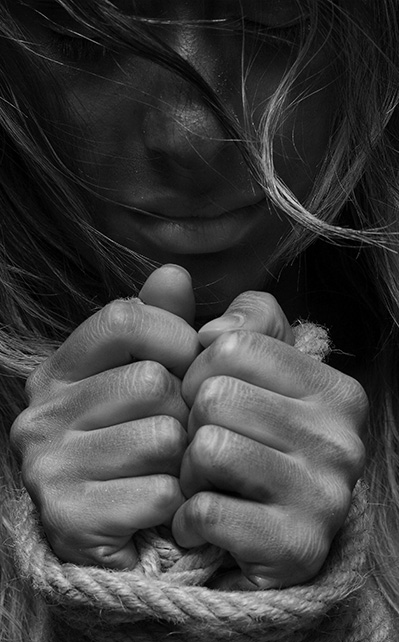 Human trafficking (HT) is a modern-day form of slavery involving the illegal trade of people for exploitation or commercial gain.

Every year, millions of men, women, and children are trafficked in countries around the world, including the United States. It is estimated that human trafficking generates many billions of dollars of profit per year, second only to drug trafficking as the most profitable form of transnational crime. Human trafficking is a hidden crime as victims rarely come forward to seek help because of language barriers, fear of the traffickers, and/or fear of law enforcement.

Traffickers use force, fraud, or coercion to lure their victims and force them into labor or commercial sexual exploitation. They look for people who are susceptible for a variety of reasons, including psychological or emotional vulnerability, economic hardship, lack of a social safety net, natural disasters, or political instability.

The trauma caused by the traffickers can be so great that many may not identify themselves as victims or ask for help, even in highly public settings. Recognizing key indicators of human trafficking is the first step in identifying victims and in helping save lives.

Every day of the year, thousands of America’s children are coerced into performing sex for hire. Some of these children are brutally beaten and raped into submission. Others are literally stolen off the streets, then isolated, drugged, and starved until they become participants.  Still others are living on the streets with no way to survive, except by exchanging sex for food, clothing and shelter.